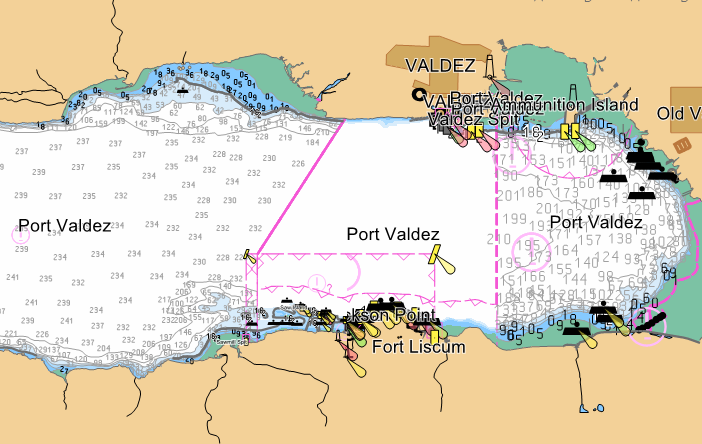 The left hand side of this chart has decluttering turned on. The right hand side is standard.

Over the years we have learnt that precisely respecting the S-52 and ECDIS standards doesn't necessarily result in the best ENC display. There are plenty of products that can have a chart display that doesn't have to follow these standards. We aim to allow compliance with standards but not to force our customers to be held back by them inappropriately. So if you aren't creating an ECDIS then you can try the declutter setting but it is switched off by default.

This is a bunch of small improvements. We considered splitting them up and allowing people to pick and chose from them but they really work best when applied together. Most of the development of this feature was for our Nuno Navigator product.

We've put an check box in the EncView1 sample so that you can try it yourself. Many of the improvements are visible in the left hand half of the chart above. The list of improvements:

Declutter is a property of the S57DisplaySettings class that takes an enum. Currently the enum has 3 values. The first turns decluttering off, the second will always do the maximum, best decluttering (as we see it), our state of the art and the 3rd is how decluttering is at this release. If we significantly change it in the future we'll make this setting do the same thing but "max" will do more!

So to take a snippet out of the EncView1 sample code:

Get in touch if you are using this feature, let me know how it's going and any suggestions for improvements are always welcome.